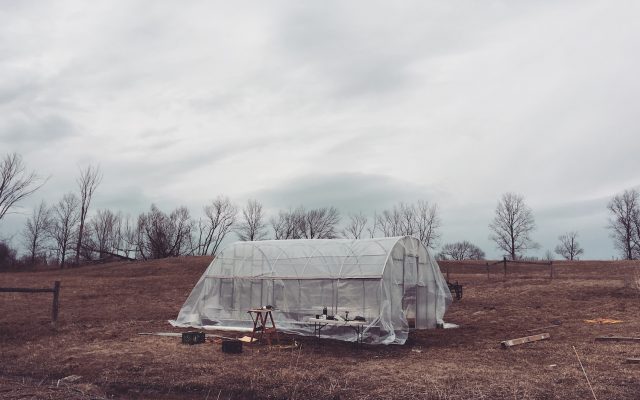 It was starting to feel dire and a little bit impossible. The ground would pivot between frozen solid and sloppy, sinking wet in just a matter of a few footsteps. We had to get a greenhouse built on this ever-changing ground in a short amount of time so that I could start the process of seed starting for the new season. The structure itself had been disassembled in pieces for nearly two years in a dusty barn in New Jersey and eventually in our goat barn in New York. We had to rent an extra large moving truck just to fit the end walls into it. Putting it all back together to look as it did when we first received it would be a challenge. Did we lose any pieces? Would we remember how they all fit together since the labels we put on each piece of rail had faded? Well, we got our answer: The damned thing up is, skinned and full of seedlings as of this weekend! Several friends stepped up and over the course of a week, we got all of the posts sunken and level and from there, it was smooth sailing. While it still needs some tweaking in the form of a gravel floor (a project for when the tunnel is too hot to start anything this summer) and some leveling of the “benches”, the most important thing is that it’s working. It holds heat, it’s withstood strong winds and seeds are already starting to germinate within it’s protective walls.

I know this seems like I’m making a mountain out of a molehill here, but I really built this up in my mind. So much of how this season progressed depended on the presence of a propagation tunnel. If we failed to get this one task done, three different small farms would be affected by it. The fact that it all happened without any snags makes me so happy and optimistic for a strong and productive season. It’s been a while since I’ve felt that and so I’m going to relish it for a bit.