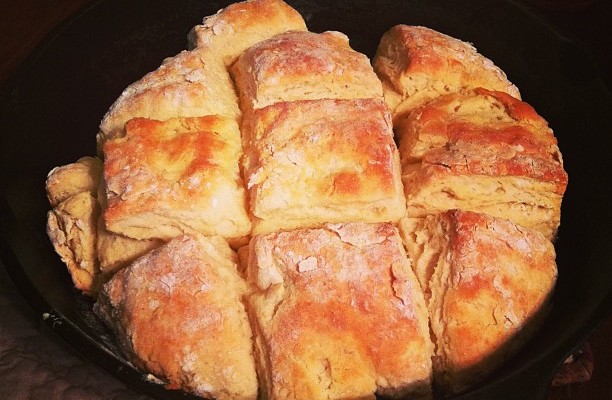 There are few food staples that vary regionally to the same degree as bread. Though many of them consist of nearly the same ingredients; flour and water, variables such as the careful handling of the dough, the quality of the grain and the method of baking have a created a vast and perhaps countless number of bread recipes from cultures and kitchens around the world.

None of them, as far as I am concerned, will ever compare to the humble biscuit. Not ever.

I grew up on these delectable quick breads, much like any child born below the Mason-Dixon. The mere sight of a puffed up, golden-topped biscuit is enough to make me do jumping jacks where I stand. I love them dearly, and only recently attempted to baked them, when I was hard up for quality biscuits in Brooklyn. I found the ones in my vicinity to be dry, dense and all together unappealing. I know some of you will chime in to defend some of restaurants known for making excellent biscuits. I won’t argue that there are places in the city that do it up right, but hear me this; baking biscuits at home and breaking them apart fresh out of the oven to enjoy is an experience you cannot get in a restaurant. Biscuits will always be better made at home, especially when you know how to make them.

I’ve spent some time noodling around with recipes and have sort of come up with my own goat-centric version. We’ve always got tons of milk piling up in the fridge, which often times gets made into yogurt, which oftentimes ends up in these biscuits. Yogurt, I’ve learned, makes a great substitute for buttermilk. It’s thick, creamy tartness imparts wonderful flavor and results in a moist and flaky biscuit that would give any southerner a warm fuzzy feeling inside. The trick to a good biscuit is a wet dough that just barely keeps from sticking, and minimal handling.

To make, you will need:

-3 cups of self-rising flour, plus extra for handling the dough
-1 teaspoon of salt
-half a cup of cold butter or lard
-1 cup of yogurt (we use homemade goat yogurt, but a store-bought thick, cultured yogurt would work as well)
-a 10-in cast iron skillet

Here’s how to make them:

Preheat your oven to 400 degrees.

In a large mixing bowl, mix flour and salt with a fork, making sure to break up any lumps of flour. Cut butter or lard into small pieces and spread throughout the flour. Using your hands, rub the fat into the flour until the pieces are the size of small peas. Add the yogurt and stir in a folding motion until all of the flour is absorbed. Dough should be sticky to the touch.

Flour a smooth workable surface like a counter top or butcher’s block. Pour dough out onto the surface and dust liberally with flour. Fold over several times lightly, lightly forming the dough into a rectangular shape. Add flour to places that continue to stick. It’s important at this point to avoid the temptation to over handle the dough. Less is more. If you are working the dough for more than a minute, you are overdoing it.

By hand, gently press out the dough to 1-inch thickness. Using a knife or pastry scraper, cut the biscuits into squares. Larger squares can be used to make tasty breakfast sandwiches, while smaller ones can accompany soups or salads. Place the biscuits flush to one another in the cast iron skillet. You may have to gently squeeze the last one in. Don’t be shy about it.

Place in the over for about 20 minutes or until the tops are a toasty golden brown. Serve with honey butter immediately or up to 24 hours after.