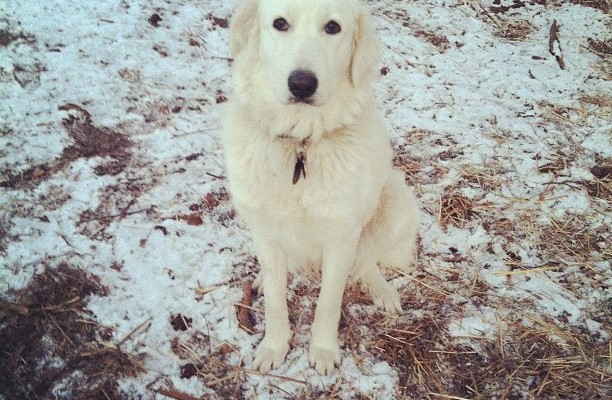 <![CDATA[ <p]]&gt;I&#8217;ve heard it on <a href="http://windancefarms.com/">good authority that when training Maremmas, a wise human should anticipate two “exuberant” phases in the livestock guardian’s developmemt. One takes place at around 7-8 months and what follows is a bit is a lull in the perpetual chasing and chewing that these young dogs can inflict on their charges. Many farmers new to Livestock Guardian Dogs (or LGDs) expect that the pups can be trusted to do their job now with little supervision. We we’re cautiously optimistic around that we could leave them for extended periods of time with little to no trouble. We had been lucky in that the first wave of puppy-like playfulness was only a nuisance and never resulted in injuries to the livestock.

That was, until this week when our gals Stevie and Peach reached the age at which their second exuberant phase tends to hit. They are yearlings now, each weighing in at 70 lbs each. They still near the large paws of dogs that still have not grown to their full size. Boy, are they ever making it known that they think they are large and in charge!

Both dogs have been having a challenging time controlling their chase impulses. Peach, who lives with the goats, is making sure to allot ample time to run circles around the goats, nibbling at their ankles until either Hershey’s, our only horned goat, gives her a stern head-butt to the grill or I catch her in the act. Busted, I belt at her a guttural “Hey, NO BITING” in the deepest growl I can muster, bringing the rabble-rousing to a quick halt. To her credit, at least she listens to commands. She’s now the easier of the two to keep in control. A surprising development to be sure. I always thought Peach was the problem child. A big goon. That’s not the case anymore. She has gentled a bit, and shows signs that she is always listening and processing information.

Stevie, the more socialized of the two, who is alone with the runner ducks and chickens, has developed some undesirable chase behavior. I think it is a result of the introduction of 30 young pullets to the flock last week. We’ve had them sequestered from the big girl hens, in a room screened off with chicken wire. Stevie has managed to squeeze through a gap in the screen and has mauled several of the birds, causing some pretty cringe worthy injuries. We’ve lost only one bird, but all of the others are on the mend and it appears that they’ll make a full recovery.

This hasn’t stopped Stevie from picking up the ducks by the neck and trying to carry them off, never actually harming them but scaring them half to death. I’ve had to give the roughest of the correction to her, flipping her over on the ground by the scruff of her neck, pinning her down, getting into her face and fiercely growling “NO”. If I were an older, trained Livestock Guardian left to teach her the ropes, she’d surely receive worse treatment. In this situation I have to behave like a beast, one that she finds intimidating, but still manages to love and respect. I hate being rough with her but I couldn’t stand it if we failed at her training and she couldn’t work with livestock. We have no place for her if she can’t work. It’s what she was born to do. I’m not sure how she’d adapt to being a house dog.

I’m getting ahead of myself, here. Failure is not an option. This dog will stop chasing and she will become a trustworthy livestock guardian. I have faith in her.

Once I pulled back from the recumbent dog and put all of the molested poultry back where they would be safe, I returned to where Stevie remained sitting and waiting. I gave her a warm pat on the head. I knelt down and wrapped my arms around her neck and told her “I forgive you. Please be good.” She nuzzled her fuzzy head into my open coat and all was well again. This is the Stevie that we want around. A gentle giant.

The gap in the door has since been sealed tight. I go out to work with the girls for an extra half hour a day, practicing commands. They get extra rations of food just in case winter hunger is what’s causing them to chase with such intent. We just have to work through this phase and hope that in the next couple of months the little fires in those bellies simmer down and things become more harmonious in our critter kingdom.