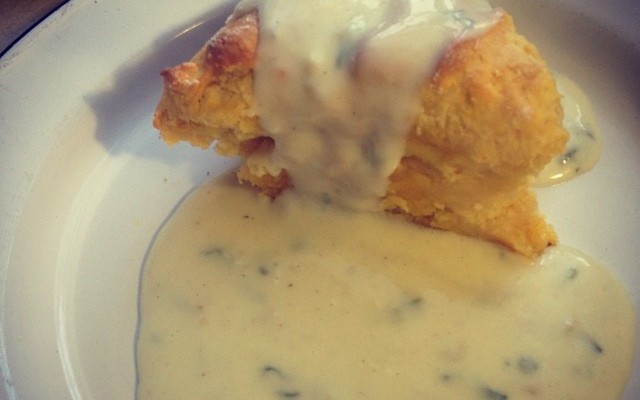 In our drafty little cottage by the sea, we keep warm by baking something daily. Sometimes loaves of bread in the dutch oven, but mostly biscuits. They are so darned easy and require no planning. You may recall a past post about my biscuit recipe, and perhaps some of you have tried it and enjoyed it. Recently, I had some pumpkins from the farm that needed to get used, so I roasted them up for soups and decided I’d try mixing some into my biscuit dough to add some sweetness and depth. They turned out great!

Even the best biscuits can be improved with gravy. Or at least that’s what I think! When we don’t have pork sausage around, we don’t let that stop us from making a creamy gravy to smother our breakfasts with. I simply traipse out to the field and grab a handful of sage and some thyme and come back in with some vegetarian gravy on my mind. It’s an easy recipe. We make it with goat’s milk because, well….we have dairy goats. It makes for a slightly more complex version of this breakfast classic, which we’ve grown to prefer!

-3 cups of self-rising flour, plus extra for handling the dough

-half a cup of cold butter or lard

-1/2 cup of yogurt or milk (we use homemade goat yogurt, but a store-bought thick, cultured yogurt would work as well)

For the gravy, you will need:

-1 tablespoon of all purpose flour

-salt and pepper to taste

Here’s how to make them:

Preheat your oven to 400 degrees.

In a large mixing bowl, mix flour and salt with a fork, making sure to break up any lumps of flour. Cut butter or lard into small pieces and spread throughout the flour. Using your hands, rub the fat into the flour until the pieces are the size of small peas. Add the yogurt and pumpkin and stir in a folding motion until all of the flour is absorbed. Dough should be sticky to the touch.

Flour a smooth workable surface like a counter top or butcher’s block. Pour dough out onto the surface and dust liberally with flour. Fold over several times lightly, lightly forming the dough into a rectangular shape. Add flour to places that continue to stick. It’s important at this point to avoid the temptation to over handle the dough. Less is more. If you are working the dough for more than a minute, you are overdoing it.

By hand, gently press out the dough to 1-inch thickness. Using a knife or pastry scraper, cut the biscuits into squares. Larger squares can be used to make tasty breakfast sandwiches, while smaller ones can accompany soups or salads. Place the biscuits flush to one another in the cast iron skillet. You may have to gently squeeze the last one in. Don’t be shy about it. I like to sprinkle goat cheddar, parm or gruyere on top before baking as well.

Place in the over for about 20 minutes or until the tops are a toasty golden brown.

In a cast iron skillet over medium heat, melt butter and add flour to make a roux. Stir until the flour is evenly incorporated and begins to turn golden. Add milk, slowly to the mixture while while whisking constantly to avoid lumps.

Once all of the milk is added and the mixture is smooth, add herbs. Cook for 2-3 minutes before seasoning with salt and pepper to taste. Ladle generously over warm biscuits and serve immediately with a fried egg and braised kale or collard greens.